and she is the ellipses the night sky leaves behind...

My lovely Canadian bear came to visit this week and we had such fun. Went to see several concerts, one at (le) poisson rouge which is possibly the cutest venue name ever. Saw Luke Rathborne twice and a performance by one of the guys from the Strokes. Last night we crashed a fancy cocktail party at Gotham Hall, snuck in through the servants entrance and rubbed elbows with all kinds of people (Patti Labelle as well, apparently, though I couldn't tell because the appetizers monopolized my attention).

I bought a mini polaroid-like camera that takes the most darling instant photos, but it's a bit tricky to use as the instructions are all in Japanese.

Went to see Madagascar 2, and embarrassingly enough we laughed louder than all the kindergarten'ers around us. Afterwards we ate at this super fancy restaurant in my neighborhood. I got such a thrill out of the experience, and thought it fitting to order a snifter of Frangelico to top off my dessert, though when I ordered it I said "i'd like a sniffer of Frangelico, sir" so I guess I'm not as fancy pants as I'd like to believe. I googled it when I got home though, so now I know what to say the next time. Also! they had a shoe buffer in the mens room! And they folded my napkin every time I got up, even if I wasn't going anywhere. It was amazing.
Posted by Jenny at 6:39 PM 1 comment: 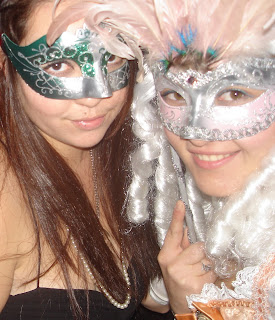 Had too much fun this Halloween. Me and my best buddy were supposed to be on a float in the Village parade, but we stopped by a bar first and lost track of time and missed our opportunity. We ended up having to sneak our way in, ran away from the parade security that was chasing after us, and manipulating and lying our way onto a float for some band. But it was worth it because there is no funner way to spend Halloween than getting to be the dancing glittering spectacle for two million slightly drunk people.
Posted by Jenny at 11:27 PM No comments: