"I confess, I do not believe in time."

It was the first day of summer, and I was waiting out a sudden rain storm in the South, in a creaky old bar, in a bad neighborhood, writing prose poems about ghosts.

Things have been a bit rough for me lately, so to restore my cheer + health I booked a last minute trip to New Orleans to visit my beloved buddy. I spent the week-end there (and my definition of week-end includes Mondays and Tuesdays) and it was an unbelievable experience. I'd always wanted to go to the South-- I had such romantic and gritty ideals about it, and it lived up to them all. We spent the days walking in the heat, wetting our beaks at various watering holes, and spent the evenings listening to live jazz and eating alligator nuggets (like chicken but more threatening).

Shortly after my arrival, buddy declared that New Orleans was the #1 murder capital in America. I think they could come up with a better slogan, personally. Later that night, an old, old man came up to me and said he was very lonely, he had no one to spend time with, and could he be my sugar pa for the night? I almost said yes, out of sheer sadness at the thought of his extensive loneliness, but then the creepiness of the situation won out. I still feel bad, it wouldn't have killed me to spend some time talking with this old man.

On my last night there, we went down to the Mississippi river and my head stopped pounding, my neck stopped hurting, and I could see in my peripheral vision again. It seems as though maybe, wherever I am, all I need to do is go down to the nearest river and I'm okay. We sat by it for hours, on the rocks, watching the occasional boat go by, just listening to music together and barely talking. I've rarely felt so close to another human being in my entire life.

One night we passed a "poet for hire" and I commissioned her to write me something. I told her to make it about "water birds" and she composed this in about 10 minutes: 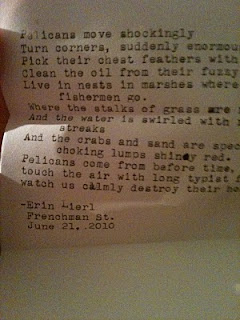 I flew back into New York late Tuesday night, and since there was some storming, the sky was magical and tumultuous. My descent back home was in this lightning filled cloudscape, the airplane rocking badly, and I thought I ought to be terrified for a moment, but I'm not afraid of flying, at all. I unbuckled my seat belt and leaned over to get a better look. Strangely, I feel more comfortable flying than any ground transportation. I feel like I have flying in my blood-- my grandfather was, after all, a pilot. 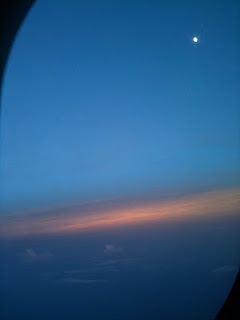 [sky before the storm]

I spent most of today trying to write but was having trouble. Instead I started drawing map-like things, which I termed "visual poetry supplements". Here is one such creature: 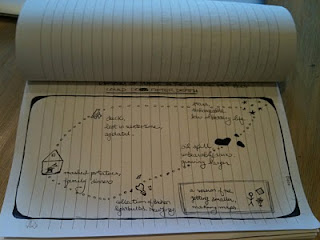 And then taping up and taking down cut-out quotes from my favorite scientists/inventors. I can't tell yet, if that's the first thing I want to see when I look at myself in the mirror.

[Blog post title is Nabokov, and probably too beautiful for me to understand, yet.]
Posted by Jenny at 11:45 PM No comments:

"there is always soma, delicious soma...

...half a gramme for a half-holiday, a gramme for a week-end, two grammes for a trip to the gorgeous East, three for a dark eternity on the moon..." [Aldous Huxley, Brave New World]

I woke up this morning with an intense desire to write, so I went down to Borders-- they have majestically large windows where sunbeams flood you if timed correctly. While there I decided to send my work out to a magazine. Upon checking my records I realized it's been a year (almost exactly to the day) since I last sent out any of my work. What did I expect, that editors would break into my apartment and smuggle out poems from my pink binder? Fairly unlikely.

I (re)pulled a muscle in my neck last week after being startled by a mouse. I haven't been able to sleep well because it's been quite painful, but am thinking of taking the muscle relaxant my doctor prescribed me. After I described how I sustained my injury, my doctor looked at me with his serious face and asked "what was the mouse doing at this time?", his pen poised above his notepad as if he were going to write down the details of the mouse's comings and goings.

Why must I live in a house with a mouse? I see him leave the apartment late at night, but then he comes back, as though he just went out for a midnight stroll or caught a late movie. It's likely my own fault-- I have a penchant for baking but do not have a sweet tooth, so cookies and sweets are often left lying around, which I've realized equals mouse heaven. But the last time we had a mouse we kept a very tidy household and this caused Teddy to commit suicide in a small blue bowl, my roommate got very sad at this and encourages me to make sure I leave enough mouse snacks around.

I read an amazing new poem, My Octopus Orphan (complete with a darling illustration) by Matthea Harvey today, here's my favorite part:

"...his ink sac predictably empty after
the hundreds of gloomy telegrams
with which he's muddied the walls
of his glass world."

Read the rest here.
Posted by Jenny at 7:42 PM No comments:

On Friday, I found myself lying in a hospital bed surrounded by doctors and nurses yelling at each other, with numerous electrodes attached to my body as they prepared to jump start my heart. I had accidentally ingested a bit of peanut and though this was not the first time I've ended up hospitalized for that mistake, it was by far the scariest. I was alone, and I didn't want my heart to give up on me, not when I was surrounded by strangers. I felt my heart beat in my knuckles, my tongue, my eyelashes -- it was begging to escape from my body, but I didn't let it. Then, things calmed down.

I spent the rest of the week-end resting and watching movies I've been meaning to get around to. I finally saw Bright Star and it was better than I expected.

"There is an electric fire in human nature tending to purify - so that among these human creatures there is continually some birth of new heroism. The pity is that we must wonder at it, as we should at finding a pearl in rubbish." -Keats

Also, letting this song break me over and over.

*defined as: "a long, narrow knife, used in medieval times to deliver the death stroke (the mercy stroke) to a seriously wounded knight. The blade was thin enough so that it could strike through the gaps between armour plates." It comes from the Latin word for mercy: [misericordia] and included in that: [cor] the word for heart.
Posted by Jenny at 10:38 PM No comments:

10 things in my kitchen right now:

I have only one day left with my darling buddy. She is leaving for the south and won't be back for 3 months. We have mainly been spending our time left: 1) playing in lingerie, stockings, high heels. 2) Watching our favorite movies 3) Walking in the neighborhood and down to the river 4) Drinking copious amounts of wine 5) Eating overpriced frozen yogurt 6) Sunbathing in our underwear 7) Eating cherry popsicles out on our balcony 8) Coming up with silly dances.

In other news, my sweet Canadian visited me. Some memorable quotes that she spoke whilst in my bed: "If it starts to hurt just let me know and I'll loosen it.", "Is it alright if I just take this off?", "

I'm dying to see the new Miranda July art exhibit in Union Square. I met her once, after standing in line and sweating for 30 minutes, at a book signing. She was lovely and so light I thought she'd float away, but she didn't, and when I introduced myself she told me her middle name was Jennifer, and I melted 10% of my body at that moment.

And, I bought/spent the whole day trying to understand: a record player. Exclusively because, i'd like to hear this voice properly.
Posted by Jenny at 12:14 AM No comments:

"Your letters got sadder..." 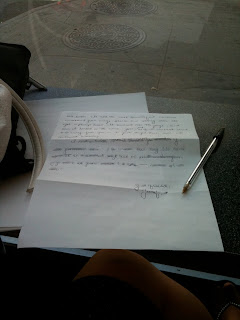 Three years from now I will be receiving some letters. When I was in high school my English teacher had us write letters to our 28 year old selves, that he saved and would mail us when the time came. I wonder what I will say to myself -- it will be like hearing from an old friend.

Speaking of letters, I spent some time this afternoon writing to an old friend of mine, one I haven't spoken to in years (photo above).


Here is an excerpt from the letter: "A fly just landed on this paper as I'm writing this letter. It was the most beautiful creature -- iridescent green wings, black lace netting over its eyes, a plump torso. It hovered over the page, and then it landed on the word "you", and, as if it couldn't stand to be away from you -- it just stayed there, and I continued writing."

Here is a picture of me in a room where women powder their noses and reapply lipstick: 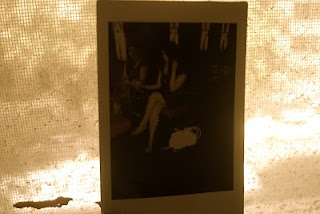 "your letters got sadder. your lovers betrayed you. kid, I wrote back, all lovers betray. it didn't help. you said you had a crying bench and it was by a bridge and the bridge was over the river and you sat on the crying bench every night and wept for the lovers who had hurt and forgotten you."
— Charles Bukowski (Love Is a Dog from Hell: Poems, 1974-1977)

Anyway. I don't even know if I will send the letter, as I don't know where my friend lives anymore. I've gotten in the habit of writing letters that I keep for months or years and think about whether or not I should send them. I never do.
Posted by Jenny at 3:01 PM No comments: